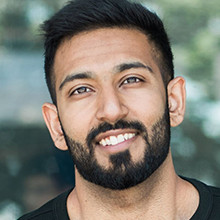 Navid Nathoo is the Founder of The Knowledge Society (TKS), a human accelerator that develops young people (age 13-17) to impact billions using exponential technologies such as Artificial Intelligence, Quantum Computing, Nanotechnology, and Genetic Engineering. TKS students have spoken at some of the world’s largest conferences including Web Summit and C2, are supported by companies like Microsoft, and are working in areas including Brain-Machine Interfaces, Quantum Computing, Artificial Intelligence, Augmented Reality, and Genetic Engineering.

Prior to his role at TKS, Navid was the founder and CEO of Airpost, which was acquired by Box (NYSE: BOX) in early 2015. Airpost was a leading cloud security company based in Silicon Valley, which received investment from world-class institutions including Microsoft, TechStars, and Alchemist Accelerator. Post-acquisition, Navid lead product for multiple groups at Box, which included overseeing product technologies in machine learning, big data, and advanced security.